How Building Boston’s Economic Future for Everyone: 2021 Mayoral Forum Came Together

As Boston voters prepare to head to the polls for a historic mayoral election in less than a month, we are taking a moment to reflect on the planning process for Building Boston’s Economic Future for Everyone: 2021 Mayoral Forum. This convening was hosted by the Black Economic Council of Massachusetts (BECMA), CommonWealth Magazine, and A Better City (ABC) at Roxbury Community College (RCC). Four out of the five candidates joined us for an in-person discussion with a virtual livestream that took place just days before the preliminary election. The recording of the livestream continues to act as a resource for the public and has been viewed nearly 1,000 times. With this reach, we are hopeful that our facilitated discussion engaged candidates on the issues and informed voters before heading to the polls in September, and assisted their choice processes for the election of Boston’s next mayor this November.

First and foremost, to make great events happen – you need great partners. Members of the Denterlein, ABC, and the BECMA teams connected to discuss their aspirations for a successful mayoral forum in early June. Once the relationships were established, we identified an ideal location: Roxbury Community College. With the partners’ strong connections to the college, the RCC became an even more perfect selection. 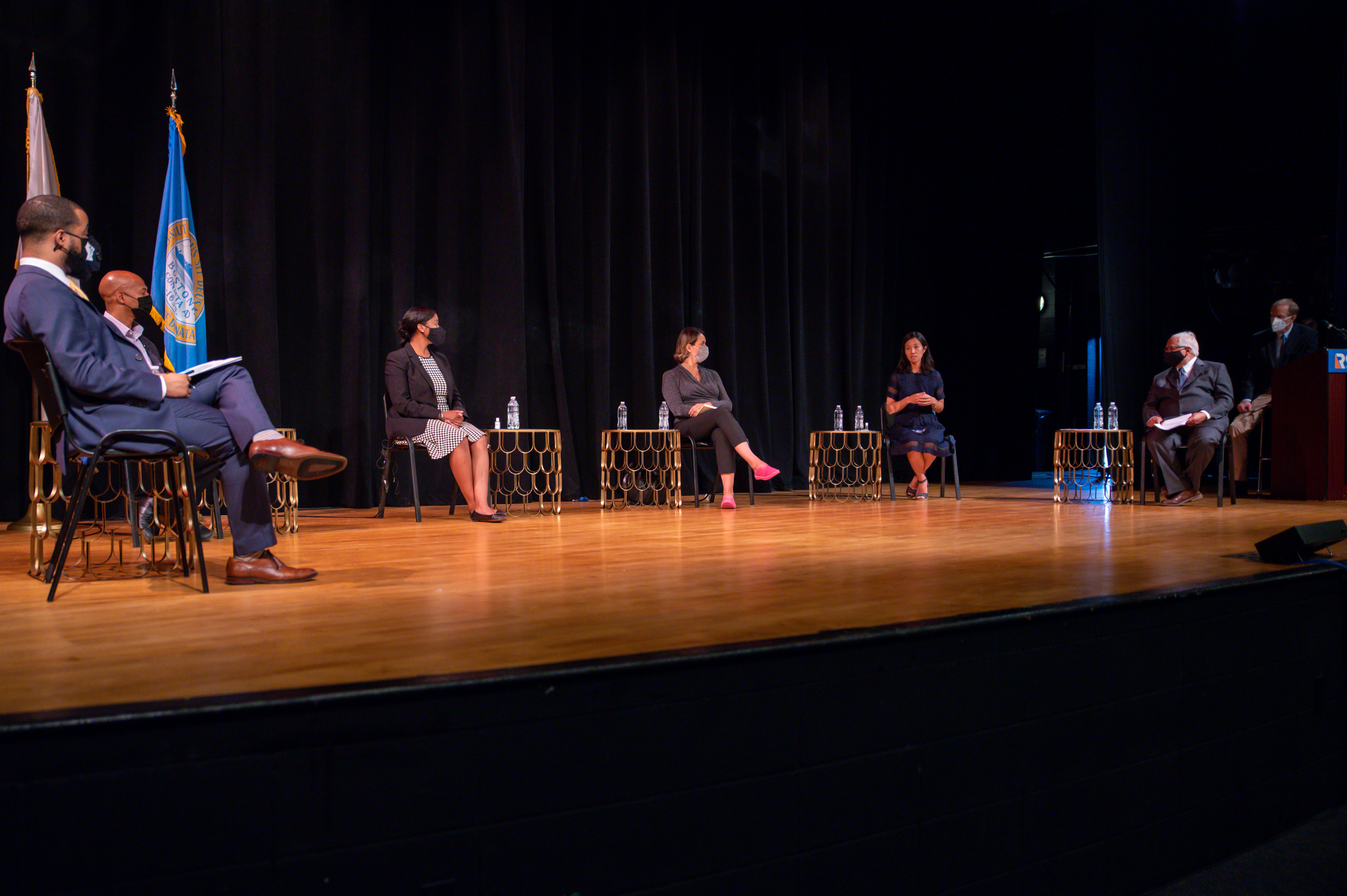 RCC President Dr. Valerie Roberson, Jordan Smock, and other members of their team dove right into production discussions with the ABC & BECMA teams. While navigating the ongoing concerns and realities of the pandemic and emerging variants, the collective decided that providing a virtual experience, in addition to an intimate in-person audience, would ensure that the event could be viewed by a wider audience.

A Better City’s invited Lynn Scornavacca with Silverlake Productions to assist with the pre-recorded elements of the event and stage production on the day of the event. Knowing the event would provide a spectacular opportunity for event planning and interfacing with some of the region’s leading political figures, BECMA invited colleagues and students from Madison Park Vocational Technical High School (MPVTHS) to participate in the execution of the in-person event’s logistics. In addition, Roxbury Community College’s Broadcast Media Technology Department Professor Justin Petty worked with a  team of students and the Boston Neighborhood Network on broadcasting the day of the event.

Each organization identified key contacts who met weekly. By following a predetermined agenda, these meetings of the minds provided the event partners a forum in which they could  discuss important topics, create clear action items and deadlines, and delegate tasks appropriately. Every detail of the event - from preferred dates to initial invitations - was determined by ABC, BECMA, and RCC leadership and circulated to the prominent mayoral campaign managers. Once established, the planning team moved forward with creating a suite of marketing and audience engagement materials outfitted for the partners’ respective social channels. From there, the group coordinated promotional efforts and continued with event-related logistical planning.

The development of the topics and questions for the program took place over multiple meetings with the policy leaders from the ABC and BECMA teams as well as our event media partner and CommonWealth Magazine Editor, Bruce Mohl. Together, they created thoughtful and constructive questions that focused on Boston’s economic future. The event partners did not want to ask repetitive questions since there had previously been over 60 mayoral candidate meetings. Therefore, our goal was specifically to highlight issues that pertained to the equitable livelihood and economic health of Boston residents and businesses while ensuring that we spoke about the candidates’ positions that had not yet been discussed. Following these meetings, the questions were edited and reviewed by co-moderators Segun Idowu and Rick Dimino.

Finally, we had an in-person dress rehearsal on September 8th at the Roxbury Community College Media Arts Center. This included, for example, the onsite arrival and preparations of the broadcasting teams, the strategic stationing greeters in the lobby, and the situating of a time clock handler at a socially distant but viewable location to ensure the participants on stage keep to time. This also required that the planning team coordinate with the operations department at RCC to provide clear and secure instructions to the candidates’ advance teams and day-of logistical partners. These efforts helped ensure that the guests and candidates were accommodated from start to finish, which was especially important given that we were dealing with the current and future leadership of the City of Boston. Every event partner played a role in executing these activities. One highlight included the invaluable role that the students from MPVTHS hospitality program, led by Brian Harris, played in assisting the event partners with greeting the limited audience of in-person attendees and leading candidates and their staff into the green room and forum stage. 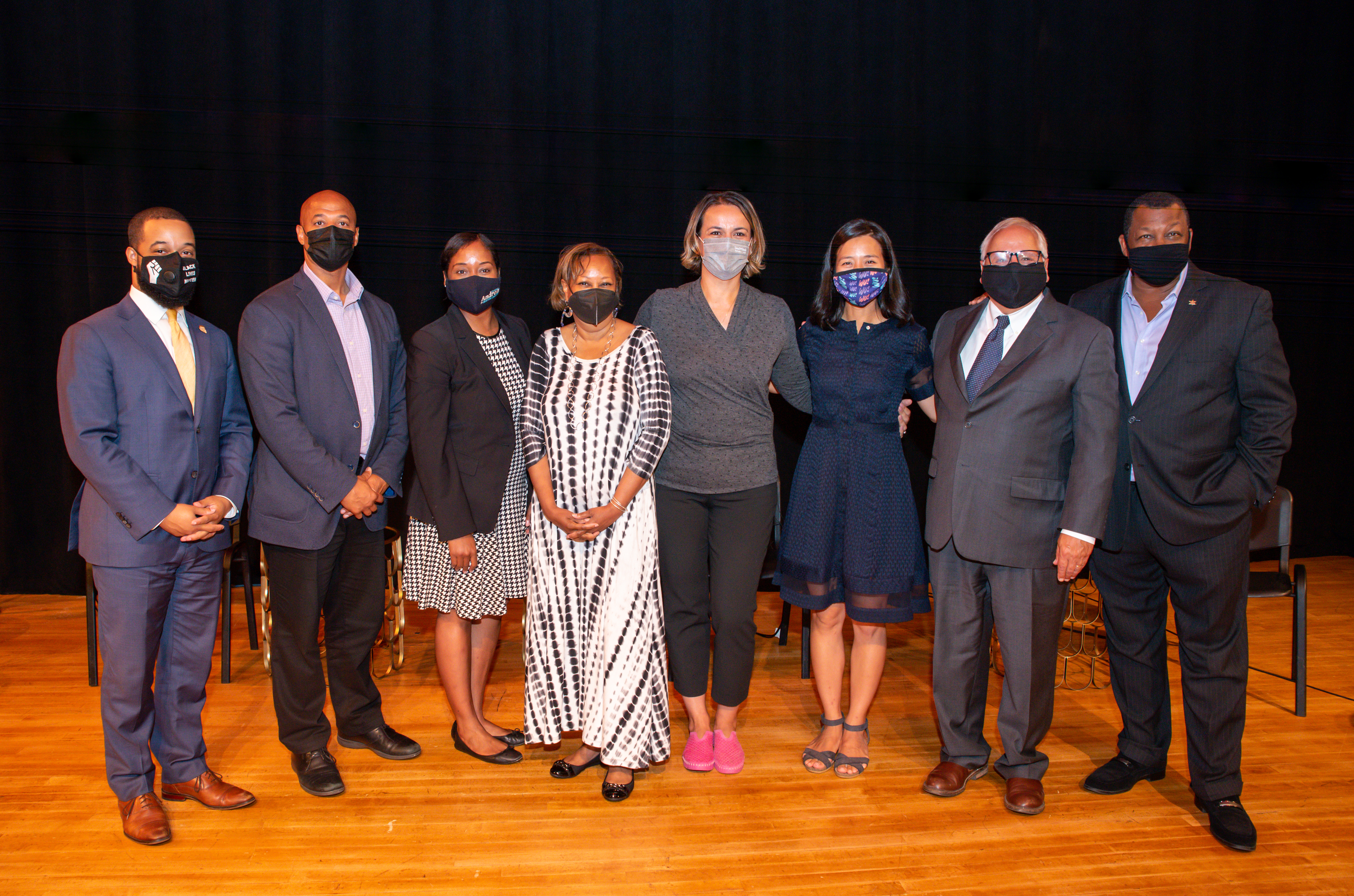 This program focused on major issues related to the economy, equity, and the quality of life challenges facing the City of Boston including transportation, business contracts, and the wellbeing of residents in light of the COVID-19 pandemic. The issues raised during the forum and each candidate's vision for the future of the Boston economy sought to deliver a strong, final impression on voters before they head to the polls, just before Election Day.

Written in partnership by: