We have seen the press and media coverage of the Commonwealth Avenue Bridge Replacement over the Turnpike, but the focused preparation process and well considered details of implementation are the real story behind the success of this project. 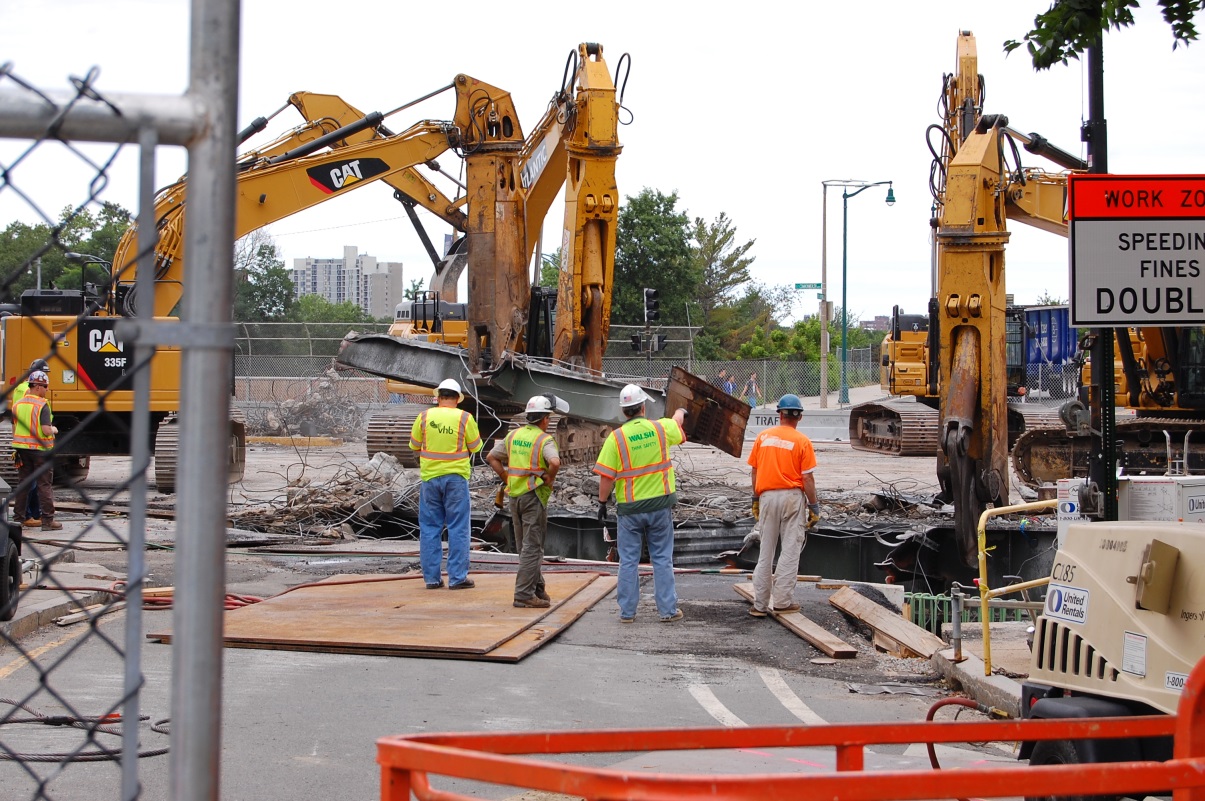 Planning: The planning goes back several years and encompasses multiple phases of work, but for more than three months before this summer’s phase of construction began, every other Friday morning over 20 people met to plan the transportation management component of the work. A Better City participated in these sessions in which problem solving, communications, and collaboration were the watchwords. In large part, the success of the project’s implementation can be attributed to meticulous attention to detail, the team spirit of the group, and a concern for the affected public.

The project is more complex than most.  Its location on the line between two municipalities – Boston and Brookline  – requiring coordination among three police jurisdictions – Boston, Brookline, and State Police – and involving operations coordination between MassDOT Highway Division; the MBTA transit, bus, and commuter rail; and Amtrak. With the variety of organizations involved, an effective coordination method was critical.  The working sessions provided that coordination forum.

During these bi-weekly working sessions, traffic management choices were discussed and decisions made about placement and content of signage, location and the role of detail officers, and how to provide access for business employees and customers where through traffic was prohibited.

Implementation: Coordination with the MBTA was a critical part of this effort due to interrupted service for over a mile of the Green Line’s Boston College branch. During the bridge replacement and reconstruction of the MBTA rail bed on the bridge, passengers were transferred to shuttle buses. Exclusive bus lanes were established to accommodate both existing routes and shuttle buses operating in two directions in the outbound lanes of Commonwealth Avenue. Concurrently, the opposite side of the roadway was demolished and reconstructed over a period of 20 days. For two weekends, buses also replaced the commuter rail and Amtrak service for portions of the routes as the bridge span over the railroad tracks was demolished and replaced.

Led by the design/build team headed by Walsh Construction, the construction activities were well coordinated starting with use of a laydown area to the west of the bridge in the Beacon Park Yards, and prepositioning of materials and equipment on the closed roadways and Turnpike lanes. On the first night, demolition began to remove the deteriorated deck and steel structure.  During the first weekend, new steel beams and precast concrete deck panels started to be installed. A 440 ton crane did the heavy lifting assisted by several smaller cranes and a fleet of other specialized equipment to complete each task. 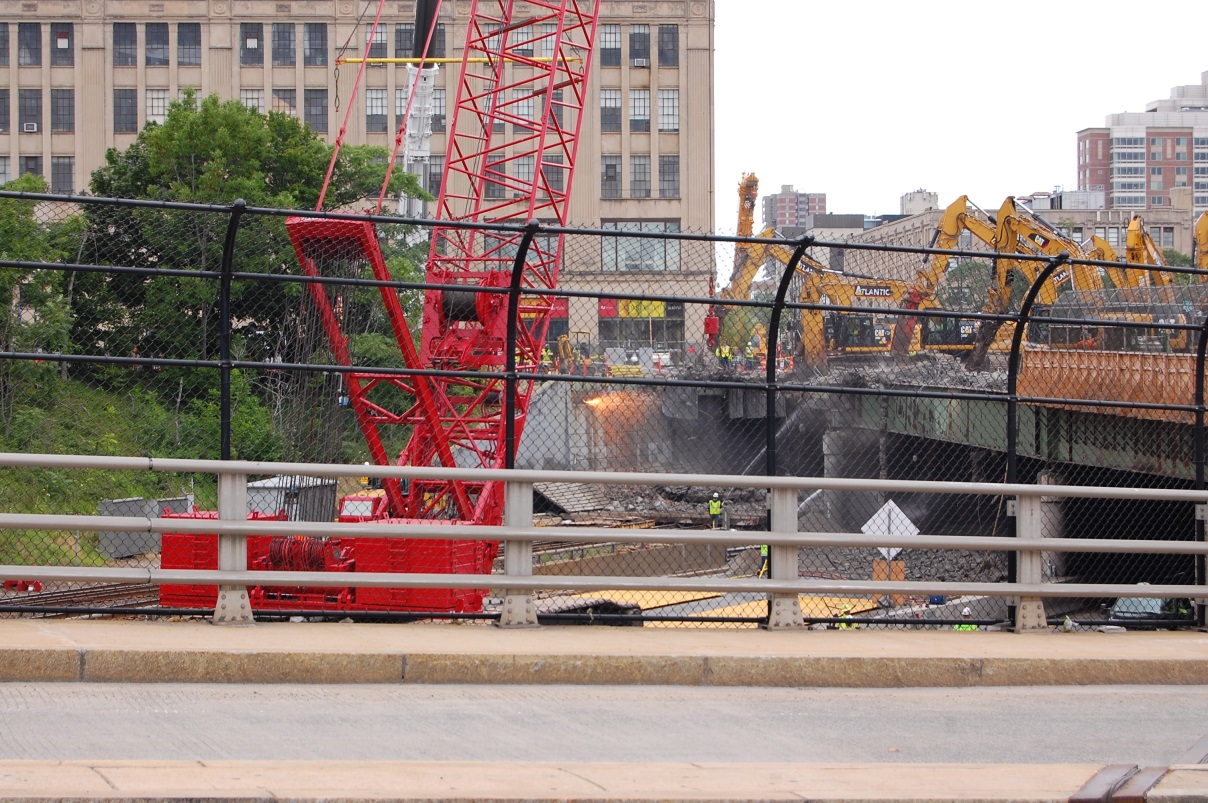 Traffic Management: Perhaps the transportation impacts that received the greatest attention were the lane reductions on the Turnpike and the accompanying delays for drivers. When the work of the 440 ton crane was finished early, it was moved to the four closed lanes of the Turnpike, dismantled in large sections, and removed in time to allow four lanes to open in each direction on the second Monday of the work. This earlier than anticipated full opening of the Turnpike brought unexpected relief, and demonstrated MassDOT’s effort to reduce the impact of the project whenever possible.  Additional work on the bridge has continued into September with minimal disruption of traffic or pedestrian activity.

Outreach: The outreach strategy was designed to reach a diverse population and actively engage the community and businesses directly impacted by the construction.  It included several public meetings locally and along the Turnpike beyond Route 128, individual meetings with businesses impacted by roadway closures, and extensive press and media coverage.  The outreach included messages on the display board at Fenway Park during games and Public Service Announcements on the NESN Red Sox television coverage.

Coordination: Special attention was given to the impact on Boston University which is located on all sides of the construction area. Michael Donovan, Boston University’s Senior Vice President for Real Estate Management, said "MassDOT representatives made themselves available to meet with the University over two years in advance of construction to help mitigate operational and construction impacts to the campus. This advanced planning allowed MassDOT to complete the work on schedule and allow the Charles River Campus to operate during the 24/7 construction period over a three week period. MassDOT and its construction manager, Walsh Construction, were professional, thorough and responsive throughout the process in managing this highly complex project involving significant regional impacts. They did a great job on this summer's work."

Lessons:  The working group that met to plan the implementation of this phase of work will reconvene this September to discuss lessons learned from the experience that can be applied to the next phase of bridge reconstruction on the westbound lanes of Commonwealth Avenue scheduled for the summer of 2018.