On September 26, the Independent Review Team established by Secretary of Transportation Stephanie Pollack in June 2018 presented to the Task Force of stakeholders in Allston three alternatives for replacing the existing I-90 highway viaduct in the narrow “throat” of land between the Charles River and Boston University.  The three alternatives represented the Review Team’s 90 day effort to define the “best” options for a Highway Viaduct Alternative, an At-Grade Alternative, and a new Hybrid Alternative that combined an at-grade I-90 with an elevated Soldiers Field Road on a viaduct over the westbound lanes of the Turnpike.

The Highway Viaduct had been modified to simplify its structural supports to allow lanes of the eastbound Soldiers Field Road to be located under cantilevered lanes of I-90.  Three options were shown for the At-Grade Alternative to reduce the impact of the Paul Dudley White pedestrian and bicycle path on the bank of the Charles River.  In the Open House portion of the Task Force meeting, members of the Review Team expressed an opinion that even with the suggested measures to address permitting concerns indicated by regulators charged with enforcing the Massachusetts Wetlands Protection Act, the At-Grade Alternative offered significant permitting risk.

During the discussion following presentation of the alternatives, a new approach to the At-Grade Alternative was suggested that would remove the Paul Dudley White path from overhanging any part of the river bank by placing it on an elevated “High Line” structure located over a portion of Soldiers Field Road.  This approach represents another hybrid concept that aims to avoid impacts on the bank while maintaining the largest transportation facilities on the ground, to provide the benefits of the At-Grade alternative including important pedestrian and bicycle connections across the corridor.

A Better City has prepared plans and cross sections of three options for the High Line  concept, which is modeled after the popular raised park in Lower Manhattan.  The Allston concept includes pedestrian and bicycle paths, planting, and pedestrian seating areas that work with the proposed Agganis Promenade connection between Commonwealth Avenue and the Charles River.  The design concept will be further analyzed over the next several weeks by the Independent Review Team as part of their final report.  Comments on the Review Team’s report are due by mid-November.  Following the comment period, Secretary Pollack will select a preferred alternative that will be further developed in the Final Environmental Impact Report scheduled to be released in the first half of 2019. 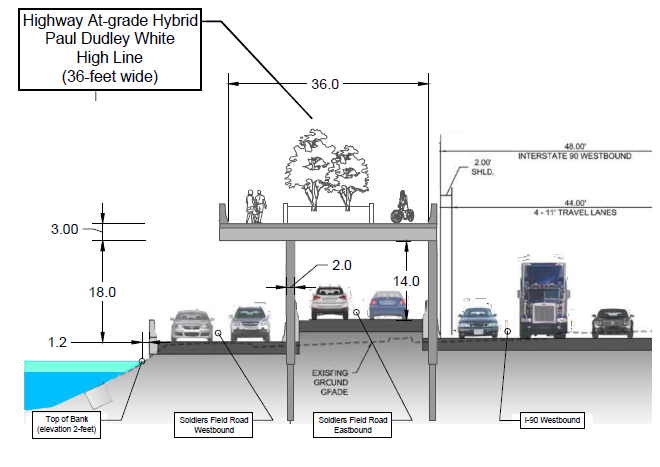