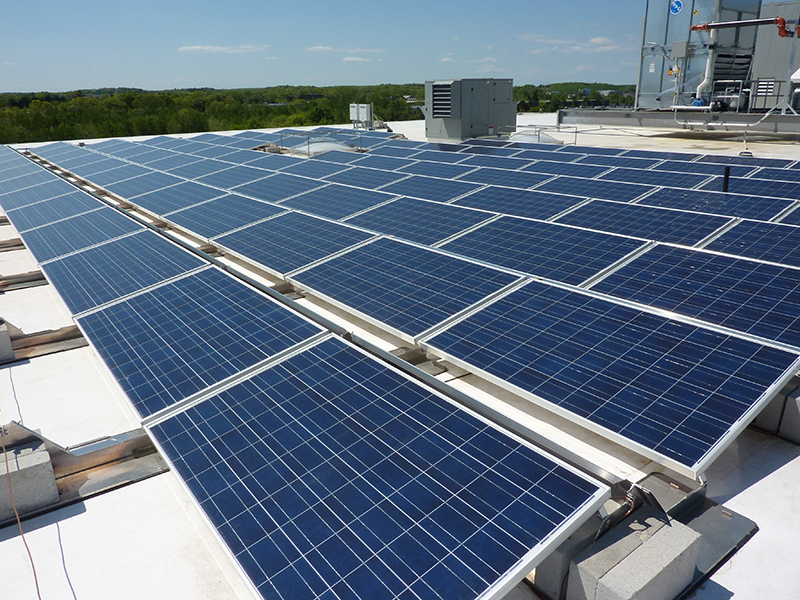 On October 19, A Better City announced the facilitation of an innovative collaborative solar power purchase agreement (PPA) among three very different board members. While most joint energy purchases are comprised of utilities or a few players within a related institution (such as buildings on a campus or offices in a business-park), such is not the case for a recent Better City project. A Better City orchestrated the nation’s largest power purchase agreement (PPA) amongst a body of diverse benefactors, with 60 megawatts (MW) of solar energy set to join the grid by the end of the year.

The three members—Massachusetts Institute of Technology (MIT), Boston Medical Center (BMC), and Friends of Post Office Square—were by united by both their long-term commitment to supporting renewable energy and greenhouse gas emission reductions, as well as a desire to minimize their financial risk to fluctuating energy prices over the next 25 years.

Prompted by the Boston Green Ribbon Commission’s Renewable Energy Leadership Prize, A Better City brought on CustomerFirst Renewables (CFR), a technical and advisory services firm, to guide the participants through the complicated process— CFR’s deep understanding of the market, analysis, and honed processes enabled the team to quickly review and agree on options, structure the PPA, and negotiate the terms and conditions. The request for proposals received 41 distinct bids and explored a range of wind and solar options located in six different RTOs (Regional Transmission Organizations) spanning fourteen states. The solar project with Dominion was selected through a competitive round of proposals, factoring in many considerations, including price, term, financial strength, and project characteristics. The selected project, built on Summit Farms in North Carolina and owned, constructed, and maintained by the local utility Dominion Resources. The participants aren’t responsible for the construction or maintenance of the physical energy system, but instead pay a fixed price for each unit of solar power created by the panels.

The project takes the form of a 25-year power purchase agreement (PPA) between the three Boston- area institutions and Dominion. In aggregate, the expected 146 gigawatt-hours of emissions-free power per year will result in the abatement of 119,500 metric tons of carbon dioxide emissions — the equivalent of removing 25,250 cars from the road. MIT’s purchase of power from this facility’s 255,000 solar panels is equivalent to 40 percent of the Institute’s current electricity use; the purchase will neutralize 100 percent of electricity consumption for both Boston Medical Center (BMC), a 496-bed academic medical center in Boston’s South End, and Post Office Square Redevelopment Corporation (POS), which manages an underground parking garage and a park in downtown Boston. MIT has committed to buying 73 percent of the power generated by the new array, with BMC purchasing 26 percent and POS purchasing the remainder. MIT’s purchase of 44 megawatts is among the largest publicly announced purchases of solar energy by any American college or university, and the largest among academic institutions in the eastern U.S.

MIT, BMC, and Post Office Square receive financial returns in two ways—through the collection of Renewable Energy Credits and the yield of any revenue from the sale of the power on the wholesale electricity market.

Renewable Energy Certificates (RECs) are attached to clean power projects, representing the offset of fossil-fuel generated power and their associated social costs; though they are intangible, they can be sold on a market. The three collaborators will receive RECs directly from the project and “retire” them, thus sequestering them from use and further monetization; this also allows the credit to be attributed to the institutions’ efforts to minimize their carbon footprint.

Returns from Sale of Power

The energy produced on Summit Farms will join the local electric grid in North Carolina and the surrounding states. The involved firms pay for the energy produced at a fixed price-per-unit, which is then sold by an intermediary to the local grid at a wholesale market price. The firms receive any profit from the transaction, represented by the difference between the flat price paid per unit energy, and the market price. While it is likely that, at some points during the lifetime of the agreement, that the difference in the fixed price and market price will result in a loss to the members, over time, we expect that the project will generate savings to the participants.

This deal will have impacts beyond what is described above.

The negative effects of greenhouse gases are not restricted to the boarders of one state or region, so the benefits of this shift to cleaner energy in one area will be realized across the globe. The efforts taken by the members within the Greater-Boston region will be futile if other parts of the nation and world are not joining in the effort to fight climate change. The structure of this Power Purchase Agreement now shows a blueprint for Greater Boston entities to have a global impact that benefits everyone.

The example set by this group of members has already started the conversation about replication and A Better City is actively engaged in catalyzing that effort.